"STEMpowering Youth" is implemented for the previous year in provincial towns, in order to introduce the concept of innovation in the local societies, to train the teachers and to help students develop new skills. In parallel, it encourages experimental design and the construction of innovative applications for the resolution of local problems and issues of everyday life. The laboratories allow the students to discover skills and talents, to obtain hands-on experience on making or processing STEM applications (Science –Technology – Engineering – Mathematics), and get educated via interaction and active learning.

In the first round of the courses, a total of 190 high school students from schools of Dodekanisa and Thrace participated, who had the opportunity to be awarded for their inventions. The four most innovative student projects of "STEMpowering Youth", were awarded and presented in the context of Innovation Week that was organised by the British Embassy and the British Council. Specifically, the projects were the following: 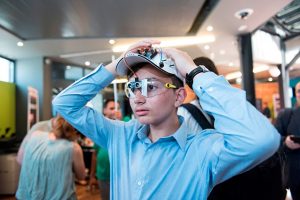 The above student projects will be presented in the Infocom congress, where you will have the opportunity to see them in person. We are expecting you in Divani Caravel hotel, in Athens, on the 25th of October!

Get a sneak peek of the projects of our students in this  video!

The second round just began in Didymoteicho, Glayki - Pomakochoria, Xanthi, Komotini, Orestias, Kos, Kalymnos, Patmos and Rhodes. The STEM courses have a nine-week duration and are provided free of charge to high school students. "STEMpowering Youth" is a program designed and implemented by the educational, non-profit organisation "SciCo" (Science Communication), with the support of Vodafone Institution and the scientific direction of Ellinogermaniki Agogi.