July 23rd, 2018 was a day that we will all remember as the day where clouds of smoke spread across the Attic sky, causing within a few seconds a radical change in the lives of many people. The devastating fire that started in Mati, was spread within a few seconds depriving the life of more than 90 people. The thick smoke that overwhelmed Attica, overwhelmed also the thoughts of hundreds of people, motivating them to act.

When it all started…

Just a few hours after the expansion of the catastrophic fire at Mati, SciCo team was immediately mobilized and decided to publish a call for raising help through Facebook platform. SciCo’s post had one major priority: to mobilize as many people as possible, in order to act and help to prevent similar disasters in the future. In particular, SciCo team through the abovementioned Facebook post, aimed on mobilizing people from different fields of expertise in order to ordinary provide solutions and prevention for similar incidents in the future. Specifically, we didn’t want another call for food or medicine since that already existed. Thus, we decided to turn to engineers, developers, foresters, firefighters and other individuals involved in innovation, science and technology, asking them to exchange ideas and to develop technologies regarding fire detection, recording and extinguishing. The end goal was the creation of various applications, useful for updating citizens when there is an emergency such as the fire in Mati. Non-profit organization SciCo focused on the fact that when the state cannot support adequately the general public, during a moment of crisis, then we can only take advantage of the knowledge that we already have, thus taking the situation in our hands. Following the Facebook post, just a few days later, 65 people, unknown to each other, set up teams and began implementing their ideas. Specifically, 65 engineers, developers and foresters under the umbrella of science innovation, the innovation house, Innovathens of the Technopolis of the City of Athens along with SciFY, joined forces and set up teams so as to create prototypes able to forecast as well as to prevent similar disasters.

By the end of September, most of the prototypes became reality, "erasing" any doubt which was expressed, regarding the success of this particular venture. SciCo and SciFY gave clear guidance to the teams in order to help them develop their ideas. Within seven weeks, teams managed to set their next steps, explored available solutions and organized the implementation of their plan, which should be implemented at the next meeting with total time available: 72 hours!

Implementation and impressive results of Fireathon

On September 21-23, Fireathon teams met at The Cube, aiming to build six prototypes within three days. The six prototypes targeted at issues such as education and information for citizens, forecasting and organizing crisis management, and dealing with real-time incidents. In order to meet their goals, the teams programmed, took advantage of open data, integrated and interconnected different sources of knowledge that they borrowed from various different countries and specialties. Furthermore, teams managed: to built circuits, test sensors, experiment with various materials at high temperatures and also they made drones fly!

The projects that were implemented were the following:

WhatTheFire: a system that motivates and educates citizens in order to reduce the fire risk.

Dimitra: a knowledge base that allows citizens and experts to harness insights regarding plants and the microclimate so as to create spaces with reduced fire risk.

Municipal Crisis Management: a platform that allows municipalities to act more effectively when a disaster is happening, through the gathering of information in order to be able to locate citizens in danger

FireCom: a mobile app based on a mature, open resource management and coordination system to fight fire.

HERMIT: a system that combines crowdsourcing, Internet of Things sensors and open data to compose a detailed hazard map that shows where ... we do not want to be in case of fire. 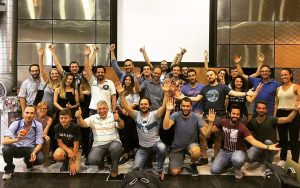 During the next few weeks, the projects will be open for the public through the internet, with the aim of further evaluation, as well as further use by the general public. The main goal pursued as Fireathon’s follow-up is to evolve these unique projects so as to overcome the prototype stage and make solutions that will help us save lives in the future.