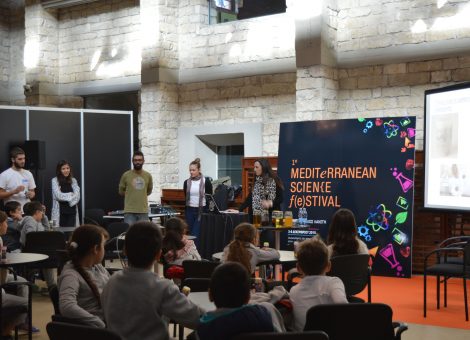 MEDITERRANEAN SCIENCE FESTIVAL IS THE LARGEST CELEBRATION OF SCIENCE AND TECHNOLOGY IN CYPRUS.

After the successful organization of the Science and Innovation Festival of Athens and Thessaloniki, the need arose for more science festivals, with a local character. The consequence of this need was the creation of the Mediterranean Science Festival, which was organized for the first time in 2015 in Limassol, Cyprus. Its aim was to promote academic and research centers in the wider Mediterranean region and to acquaint the residents of each region with the events and happenings of the festival.

The festival is addressed to the school and university students as well as to everyone else who wants to discover the magical world of science. Through this, the organizers seek to communicate science to the general public in a simple, understandable, and fun way, aiming to build a relationship of trust between scientists and the public as well as to encourage young people to look into STEM professions.

From the first year of its organization until today, it counts more than 20,000 visitors - of who 8,500 are school students - who have the opportunity to take part in an enriched program of over 140 activities. Such activities include interactive exhibits and experiments, debates, speeches and science cafes, workshops and workshops for children and adults, science theater performances, educational events, art exhibits, screenings, and more.

The Mediterranean Science Festival is organized by the educational, non-profit organization SciCo Cyprus, the Cyprus Youth Organization, the Cyprus Research Promotion Foundation, and the Cyprus Ports Authority, in collaboration with a number of academic, research and educational institutions. The festival is under the auspices of the President of the Republic of Cyprus Mr. Nikos Anastasiadis.

The Science and Innovation Festival has been held, apart from Athens (ASF), in other cities of Greece, such as Thessaloniki (TSF), Larissa (THSF), and Patras (PSF), while in the near future Ioannina ( ISF), as well as other regions of Greece, are expected to host their own special event.

For more information, you can visit our official Facebook and Instagram pages, as well as watch the video below, with some snapshots from the festival.