With more than 33.000 visitors, Athens Science Festival 2015 welcomed CERN’s educational project for CMS. CMS is a particle detector, part of the Large Hadron Collider (LHC). It has participated in the Higgs boson quest, while it makes research on a big spectrum of physics, such as multiple dimensions and dark matter.

In the festival in March 2015 daily workshops for students and general public took place and an extended exhibition of science and art on the work of CMS was presented. One of the most popular exhibits was the four banners in the wall of “Old Retorts” of Technopolis where pictures of the detector were blended with flower photos, creating a smart, highly aesthetic optical illusion. 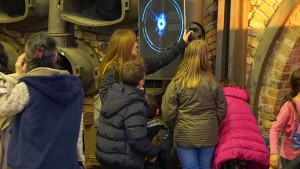 School Lab is recognized as a best practice by the Institute for Educational Policy
SciCo travels to Qatar!